A post alleging that the US embassy in Ethiopia has expressed hope about the imminent release of jailed opposition leader Jawar Mohammed has been shared hundreds of times on Facebook. But this is false: the US embassy in Addis Ababa has refuted the claim and there is no official indication that Jawar will be freed soon.

Jawar, who is a member of the opposition party Oromo Federalist Congress (OFC), is a rival to Ethiopian Prime Minister Abiy Ahmed.

Both men are from the Oromia region, home to Ethiopia’s largest ethnic group. Jawar, a polarising media mogul, helped Abiy come to power in 2018 but the pair have since fallen out.

As AFP reported, Jawar was arrested in July 2020 following violence that erupted with the assassination of Oromo singer and activist Hachalu Hundessa.

“Good news. The US embassy is hopeful that Jawar Mohammed and et al cases be dismissed and released – tomorrow (sic),” the screenshot reads.

The pro-Oromo page that shared the screenshot has repeatedly promoted content in support of Jawar. 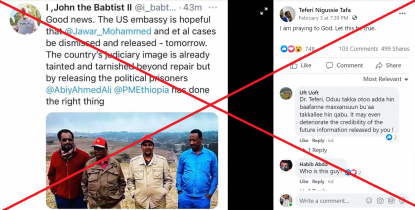 As of February 11, 2021, Jawar and several other leaders of the OFC remain in prison. All OFC members seen in the picture, with the exception of Merera have been on a hunger strike, demanding better treatment for visiting family and supporters and an end to legal and other harassment of Oromo opposition politicians. AFP covered the story here.

US embassy refutes the claim

The US embassy in Ethiopia refuted the claim that it had said it was “hopeful” Jawar would be released soon.

“We have no record of such a comment from the US embassy”, it told AFP Fact Check on February 9, 2021.

Read the original story on AP