US boosts Africa diplomacy on land and sea

NEW YORK/WASHINGTON — U.S. Secretary of State Antony Blinken has made four calls to Africa since assuming office last month. First to his South African counterpart, followed by a conversation with the chair of the African Union. His third call was to Ethiopia.

On Tuesday, he spoke with Rui Figueiredo, the foreign affairs and defense minister of Cape Verde. The Republic of Cape Verde, or Cabo Verde, is a tiny island nation off the west coast of Africa with a population of around 550,000.

The decision to phone the archipelago, ahead of 52 other members of the African Union, is a strong message from the administration of President Joe Biden that it is serious about the “great power competition” with China.

Cape Verde sits in the heart of the Atlantic Ocean, some 570 km off the west coast of the continent of Africa and serves as an important sea and air refueling site. Securing access to the islands will be a geopolitical win for either Washington or Beijing.

“The Secretary noted that the United States is proud to be a friend to Cabo Verde, which is a model of democratic governance and human rights in Africa,” a State Department readout said. 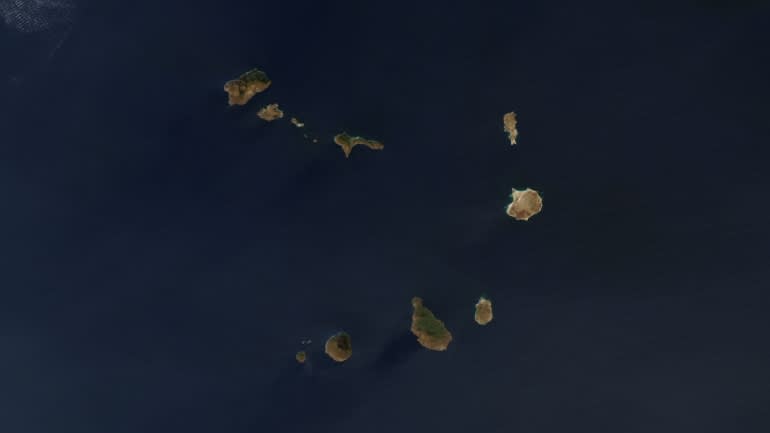 A visible image of the Cape Verde Islands on as seen by the Moderate Resolution Imaging Spectroradiometer that flies aboard NASA’s Aqua satellite. (Photo courtesy of NASA’s MODIS Rapid Response Team)

The U.S. and Cape Verde have strong historical roots dating to 18th century whaling routes. Cape Verde was where the U.S. opened its first consulate in sub-Saharan Africa, way back in 1818.

U.S. Navy and Coast Guard ships have been making frequent visits to the islands and in 2017, a Status of Forces Agreement was signed to specify the legal conditions under which American troops would enter the country.

But the geopolitical importance of Cape Verde seems to be rising evermore as the U.S. and China play a maritime chess game of power projection. China opened its first overseas military base in Djibouti, on the east side of Africa in 2017. Having a foothold in the west side of the continent could vastly expand the People’s Liberation Army Navy’s area of operation.

China has already built a presidential palace, a government compound and a football stadium in Cape Verde and is planning a $60 million expansion of a university this year.

There is interest on Capitol Hill. “Clearly the location, geographically, of this nation is a great strategic significance to anyone considering maritime trade or perhaps even naval ambition,” Republican Sen. Mitt Romney said in a 2019 Senate Foreign Relations Committee hearing. “And it’s not surprising to understand that China is making a substantial investment in the country,” he added.

In an October 2020 confirmation hearing, then-nominee to be Assistant Secretary of Defense for Strategy, Plan and Capabilities Victor Mercado called Africa a challenge.

“We know China is very interested in Africa. Not only in the base they established in Djibouti, but we know they’re interested in the west side, like Cape Verde, Equatorial New Guinea,” he said.

Lauren Johnston, a research associate at the SOAS China Institute of the University of London, said: “Any country with good maritime positioning is important to a maritime power agenda. Any good port is good to have probable access to, and better to be an earlier arrival.”

Johnston noted that this year’s Forum on China-Africa Cooperation, Beijing’s once-every-three year conference on Africa, will be held in Senegal, the first time to be held on the west side of the continent.

“China’s Africa attention is firmly and visibly in West Africa,” she said. “And with United Arab Emirates appearing to have become a logistics and digital currency partner of China’s Belt and Road Initiative, including agreeing to invest more than $1billion in a new deep-water port and maritime facility in Senegal, this makes the Cape Verde, a former Portuguese slave trade hub off Senegal, more important than previously.” Linda Thomas-Greenfield, the U.S. Ambassador to the United Nations, during her confirmation hearing before the Senate Foreign Relations Committee on Jan. 27.   © AP

Meanwhile, the Biden administration is also keen to strengthen Africa diplomacy on land as well.

The U.S. Senate on Tuesday confirmed Linda Thomas-Greenfield as ambassador to the United Nations. The new envoy boasts 35 years of foreign-policy experience with particular expertise in Africa, having served as assistant secretary of state for African affairs in Barack Obama’s administration after diplomatic postings in countries including Nigeria, Kenya and Liberia.

Thomas-Greenfield is “the right choice to rebuild our nation’s standing at the U.N. and in other multilateral venues,” Blinken said in a statement Tuesday.

As the U.S. rotates into the chairmanship of the U.N. Security Council in March, it will face an array of challenges, including human rights, climate change and the coup in Myanmar, that will test its ability to promote international cooperation.

Thomas-Greenfield contrasts sharply with the U.N. envoys of former President Donald Trump, namely Nikki Haley and Kelly Craft, both of whom had thin foreign-policy resumes. Craft in particular was believed by many to have been tapped for the role in large part because of her ties to Trump, as her husband was a major donor to the then-president’s campaign.

The biggest issue for the incoming ambassador is China’s growing clout at the U.N.

On Ethiopia, both reconfirmed their commitment to support Ethiopia’s efforts to respond to the crisis in Tigray.

The Trump administration’s neglect of the U.N. system “created opportunities that essentially facilitate China’s inroads,” Jeffrey Feltman, a fellow at the Brookings Institution, wrote in a report last September.

“What makes Western observers uneasy is the expectation that China will use its stronger voice to patiently chip away at human rights and other values-based issues in the multilateral system,” Feltman wrote.

Beijing’s rise has been especially evident in the area of human rights.

The Trump administration withdrew from the U.N. Human Rights Council in 2018, citing bias against Israel. Meanwhile, China was elected to the council late last year and officially joined in January. The U.S. is rejoining the organization as an observer under the Biden administration, but its powers are extremely limited compared with those of full members. Chinese children hold African flags during a rehearsal prior to the opening of the Forum on China-Africa Cooperation (FOCAC) 2018 Beijing Summit in Beijing.   © Reuters

More than 50 countries — of which about half were African — responded with a statement defending Beijing and calling the Hong Kong issue part of China’s “internal affairs.” While the statement was delivered by Pakistan, it likely worked closely with China.

In her nomination hearing last month, Thomas-Greenfield said that close ties with African countries will be key to countering China’s influence.

Feltman said in his report that “China can usually count on the ‘A3’ — the three rotating African seats on the [Security] Council … taking China’s positions seriously.”

Soon after his confirmation in late January, Blinken made early calls to South Africa and the African Union, expressing Washington’s desire to build stronger ties with the region. Biden is considering appointing a special envoy to handle political instability and conflict in East Africa, according to U.S. media.

Getting closer to Africa will be a challenge in some respects. China has strengthened ties with African countries through economic support that Washington would be hard-pressed to compete with, and the Biden administration’s emphasis on democracy and human rights will not mesh well with authoritarian regimes in the region.