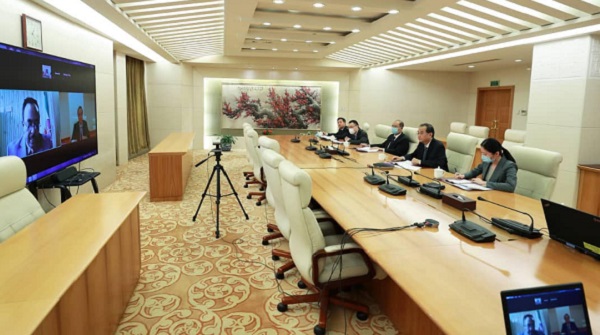 According to the Ethiopian Embassy in Beijing, Redwan said during the occasion that China is an important partner of Ethiopia.

The two countries maintain close exchanges in various fields such as politics, economy and trade, and humanities, he added.

The state minister expressed his gratitude to China’s resolute opposition to external interference in Ethiopia’s internal affairs and its valuable support in infrastructure construction, economic and trade investment as well as technical cooperation.

In recent years, the two countries have witnessed frequent high-level exchanges, solid political mutual trust, and firm support for each other on issues of core concern of both sides, and fruitful results from pragmatic cooperation.

After the outbreak of COVID-19, the two sides have carried out effective anti-epidemic cooperation, setting a model for China-Africa unity in fighting the epidemic, Li noted.

The Assistant Foreign Minister  stated that China is willing to strengthen communication, coordination and cooperation with Ethiopia, promote the continuous development of bilateral relations and China-Africa relations, and defend the common interests of developing countries on multilateral fore.

The two officials also exchanged views on issues such as the situation in Tigray, the Grand Ethiopian Renaissance Dam, and the territorial dispute between Ethiopia and Sudan.

The two sides have agreed to continue to deepen mutually beneficial cooperation between the two countries and promote the comprehensive development of the strategic partnerships of the two countries.