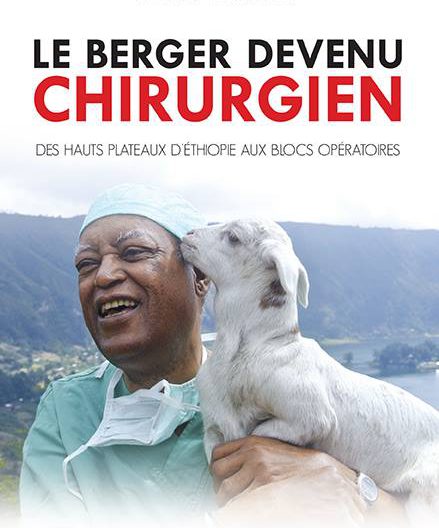 This is all about the life journey of an Ethiopian physician who transformed his skill and career from unknown shepherd to honorable surgeon. The essence of this statement is marked down in the last sentence of the book entitled “The Shepherd Became a Surgeon” written by Professor Mitiku Belachew in French and translated into Amharic by Azeb Worku.

“I am a citizen of the world. My profession helped me to tour the globe and introduced to various people and their cultures. I am the person made up of these cultures and thoughts,” Mitiku said in his book.

It is not hard to him to meet and adapt himself with new people and places. He thought he has a “Gudifecha” or adopted countries like Belgium, France and Morocco. “The key to success is to make great effort for life and await chance with patience. And then enjoy on what one has in hand,” the book stated.

Mitiku was born in Wenchi a town 150 km southwest from the capital during the second Italo-Ethiopian war. It was the time when the fascist army fired hats and villages as revenge to the attacks from Ethiopian patriots. With all these messes, the young son Mitiku appeared to flicker a sense of hope to his family.

Mitiku served his family through herding cattle until his 12. He learned various skills and knowledge by the time. Among these skills are running, swimming and horse riding. In addition, he learned unique skills like burning a fire only from the friction of a wood without using matches or lighter. He also developed a skill on predicting time only by considering the position of the sun in comparison from his own shadow.

On the other hand, the shepherd Mitiku also learned how to identify seasonal variation and daily weather condition. This helped him to escape from rainfall. He used to apply this either through sheltering under trees or by removing condensation through releasing smoke into the cloud. He also developed the knowhow about senses and sounds of animals. This enabled him to provide his cattle with the needed forage and keep their health.

Mitiku began his elementary education in Jimma where he learned grade 1 and 2. He started the grade 3rd education at Medhanialem School in the capital returning from Jimma together with his benefactor and one of the Haileselassie’s aristocrats Ras Mesfin Sileshi due to administrative matters.

Thanks to Mitiku’s brilliant mind and pursuit of knowledge, his teachers decided to promote him twice a year for his remarkable educational performance. Accordingly, Mitiku joined grade six students in the next academic year. And he again jumped to 8th grade for achieving the grade 6th national examination with 98 points. At the same time, he was struggling with economic challenges. Therefore, he frankly asked for the support of Mistress and Mister Renton (his English language and mathematics teachers) unless he will be withdrawn. Then, they expressed him their permission so that he used to live with them until the end of his academic life in Ethiopia.

In grade nine, Mitiku was able to participate in a Photograph Club where he once met and took the picture of Haileselassie I in an event in which the emperor came to the photo laboratory. At the time, the emperor’s administration used to recruit healthy and top scoring students for navy and other military services. Thanks to the school director suggestion, Mitiku escaped the military career for taking grade 12th final exam at the end of the academic year while he was grade 11.

He completed his education with high score within seven years that should have been taken 12 academic years. One of the amazing moments in Mitiku’s life is his choice to study Medical Science in Belgium while he hardly speak French and had gotten the same chance in London in which he was familiar to English people and their language. But he did it! He has become an honorable surgeon studied at the University of Liege, Belgium. He believed that passion, confidence and diligence are the key behind his achievement.

After the time taking educational journey that stretched between Ethiopia and Belgium, Mitiku was named as Surgeon and Midwife Physician in 1970. And he began his career in Mont Falise Clinic at Huy, Belgium. He mentioned that he learned medical skills of attentiveness, carefulness and compassion from his surgery teacher Professor Honore and integrity from Dr. Delgof and other physicians of his age. In 1972, he joined Bavier Hospital in Liege, as senior assistant doctor. He was also studying his specialty side by side.

After two years, he went to London, for his scholarship diploma of Fellow of the Royal College of Surgeons (FRCS). And he achieved his FRCS diploma and returned to Liege. Surgery is a time taking profession that develops through time as it needs scrupulousness. If the doctor makes a mistake, he will have several opportunities to correct it and improve his skill. However, the reverse is not true to the patient who lay on the operation table relying on the hands of his doctor. His life is on the meticulous effort and decision of the doctor within a given time in that surgical room, as to Mitiku.

It was in 1975 that professor Mitiku was inspired to operate a bariatric surgery while he was working at Bavier Hospital. And he

performed it to a nurse serving the same health organization. The nurse was affected by diabetes and hypertension caused by obesity. And Mitiku did perform the surgery that took three hours. It was successful. The nurse that was weighing 120 kg had reduced 50kg within a year.

In 1978, Mitiku joined Reine Astrid Hospital located in Huy, Belgium. He spent his time in performing visceral surgery. In the beginning of 1981, Mitiku began treating patients affected by obesity. And he performed thousands of surgeries for the next ten years. On the 1st Sep. 1993, professor Mitiku introduced a new technique of bariatric surgery named Laparoscopic Adjustable Silicone Gastric Banding (LASGB) in the field of laparoscopy. The remarkable LASGB surgery operates with only incisions in the upper abdomen to put an adjustable band intended to limit food intake thereby the patient will possibly reduce weight shortly.

The first LASGB surgery took three hours. It was the prime news on the Belgian media including Belgian Radio, television and various publications of the time. This invention has saved many people threatened by morbid obesity. On March 1994, the first LASGB international laparoscopic treatment workshop was organized by Huy Medical Center. It had taken place in Huy, Belgium with the presence of over 30 honorable physicians from various countries. The workshop was essential to show the importance of LASGB through undertaking four successful live surgeries on volunteers. Accordingly, the center had expanded the knowledge through undertaking over 10 workshops and giving training to more than 300 surgeons came from the four corners of the world.

Involved in bariatric treatment, Mitiku understood the distinction of this world in which some people are dying from hunger but others from overconsumption. He performed surgery for more than 30 years. Regardless of the surgeries he operated before joining Reine Astrid hospital and those he performed on international workshops, Mitiku was operated over 30,000 surgeries.

He has founded the Benelux Association of Bariatric Surgery. He organized the 1998 3rd International Federation for the Surgery of Obesity and Metabolic Disorders Symposium. Mitiku also published more than 50 scientific research papers. He also organized various workshops in Africa including Ethiopia

Similarly, Benin, Algeria, Morocco are some of the African countries in which Mitiku in concert with his partners tried to provide knowledge and material support in the health industry.

Professor Mitiku had coordinated efforts to the improvement of health in his motherland. He also implemented various development projects improves the lives of Ethiopians in health, social, and economic spectrums. To this end, Mitiku together with his life partner had organized a charity Association named Salamta. He also constructed a school at his home town, Wenchi. The elementary school teaches about 1000 students.

Professor r Mitiku is the second of the last to his parents who had given birth to 11 children. Far from this truth, Mitiku had only one child since he lost his second son Ephrem in 1993, the same year he invented LASGB.

The most disappointing thing in life for Mitiku is being unable to manage life as per one’s interests. “Contrary, the more we become able to shape our life in our own way, the most we become happiest. I always ask myself I have another choice when I faced digesting things. If there is any option, I will be ok. If not, I will try to adjust myself. And this is what I have learned from life and what I want to teach to my children,” he believed.

He thought that he is the only person to decide anything in his life. “I am the captain of my life boat. And this thought makes me happy.” The presence of options and the freedom to pick one makes a person multi-skilled. In fact, there are times that we become barehanded. And some times, life facilitates situations in which we can make our choice quickly to change ourselves. Such active measure will bring success in life, the surgeon stated in his book.

The book contains various issues including love, family, school and medical life among others. It is on the market at a cost of 250 ETB or 21.65 USD.