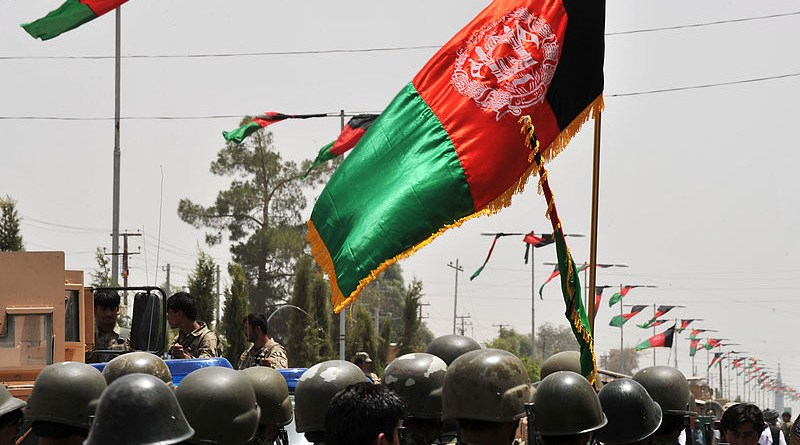 China fears the repercussions associated with the looming US withdrawal from Afghanistan as a rise of extremism in the country could spread and threaten Beijing’s key positions in Xinjiang and Central Asia. However, America’s exit might yet bring some unforeseen benefits. A Chinese-led peacebuilding agenda would mean intensified cooperation with Iran, Pakistan, and Russia. Overall, this undergirds a new order of exclusion that could sideline the collective West in the traditional pivot area.

The US withdrawal from Afghanistan will without a doubt create a geopolitical vacuum with significant ripple effects beyond the country itself. The fall of the Afghan government in the span of only several months is a very likely scenario because of low level preparation of the Afghan forces.

In fact, the process has already started.

For instance, Mazar-i-Sharif, Afghanistan’s fourth largest city, fell under Taliban control in June. The last time it was controlled by the movement was 20 years ago. Per the UN,  the Taliban has taken control of 50 districts across the country since the middle of May. Additionally, an increased number of terror attacks as well as ancillary chaos has been reported on the Afghan border with Tajikistan and Uzbekistan, signaling a rapidly changing nature of the conflict.

China as a Freerider

Afghanistan is a host of various outside powers with  a multitude of often contradictory interests when it comes to Afghanistan’s future. Among them, China holds a special role. Its interests in Afghanistan, a nation with which it shares a more than 80 km long border, have grown complex in the last decade. For Beijing, Afghanistan serves both as a geographic corridor into Central Asia and fertile ground for security threats, termed as ‘three evil forces’ of separatism, religious extremism and terrorism, that could upend the stability of the restive Xinjiang region

Thus far, it is clear that China has benefited from a long-standing American engagement in the region. The US presence served as a bulwark against Islamist extremism while allowing Beijing to cement its position in Xinjiang. Secondly, the presence of US and NATO forces in Afghanistan allowed Beijing to spread the BRI to Pakistan’s southwestern Balochistan province and Central Asia. Amidst the US withdrawal, the safe treading in both cases might no longer be assured.

Up to this point, the jihadist threat to China has been largely rhetorical and muted overall. With the US exit from Afghanistan, this dynamic is likely to change as well, with early inklings in the instance of  Chinese nationals being advised to leave Afghanistan amid the worsening security conditions.

It is little wonder then that despite opposing the US invasion of Afghanistan some 20 years ago, China is betraying its apprehension about a swift American withdrawal.

As such, criticism has come from the Chinese leadership that America’s hasty withdrawal plans “led to a succession of explosive attacks throughout the country, worsening the security situation and threatening peace and stability as well as people’s life and safety.” A similar sentiment was shared in calls between Chinese and Pakistani Foreign Ministers.

China also feels that US withdrawal might have more far-ranging effects on the emerging global US-China rivalry. With the drawdown of US presence in the Middle East and the exit from Afghanistan, America will now have more time and resources to dedicate to the competition with China in the Indo-Pacific region. Furthermore, Beijing fears that this might pull China into the Afghan conundrum, thus serving a major American goal: distracting China from the South and East China seas.

Despite the cavalcade of concerns noted thus far, the US withdrawal nonetheless presents China with certain opportunities. Though cooperation with Afghanistan has lagged behind (by the end of 2017, Beijing had only $400 million in investments stocks in the country. Forcomparison, in neighbouring Pakistan, the figure stood at $5.7 billion) what Beijing envisioned, the geopolitical vacuum might provide a necessary momentum to China for expanding its economic presence through the BRI projects. This would allow Beijing to augment an overland connection to the China-Pakistan Economic Corridor.

Indeed, Afghanistan’s economic lure is hard to ignore – its mineral riches are valued by $1-$3 trillion. Furthermore, China would likely aim at the unexplored Afghan oil reserves and natural gas reserves of nearly 15.7 trillion cubic feet. As China seeks alternative sources of energy import to feed its soaring demand, these figures are hard to disregard for Beijing.

Another advantage of America’s exit is China’s likely use of Afghanistan as a testing ground for the promotion of alternative peacebuilding and security measures to settle the conflict. Western military presence, as well as security and peace initiatives, will likely be replaced by China’s order of exclusion, where non-regional, mostly Western liberal states, will be sidelined from participating in peacebuilding and security provision along China’s borders.

The Chinese version of peacebuilding would also likely involve an agreement with Eurasia’s like-minded states such as Iran, Pakistan, Russia, as well as minor Central Asian states, as junior partners. They are currently forming the illiberal movement where the Westphalian concept of primacy and inviolability of the state borders and internal governance model are feverishly upheld. China’s Foreign Minister Wang Yi even tried to frame America’s withdrawal in positive terms claiming that Beijing is ready to help promote future “stability and development” of Afghanistan.

Boots on the Ground? Unlikely

As the news of the US’ rushed withdrawal announcement came through, the main question posited by analysts was whether Beijing would look into transforming its fledgling security presence in the north of Afghanistan into a wider military operation, i.e. peacekeeping mission. Much will depend on the level of non-state security threats emanating from Afghanistan, but the most probable security path Beijing would take is to merge efforts with other regional states to contain and, where necessary, wipe out terrorist and extremist cells in the country. Russia, Pakistan and Iran would gladly agree to work with China as it would increase their geopolitical importance. Chinese analysts have already opined that cooperation between the regional states would provide a more effective security umbrella.

The four Eurasian powers could work on containing wherever necessary, remaking and influencing the Taliban’s behaviour so that it befits the security and economic interests of China, Russia, Pakistan and Iran. And this will be in contrast with America’s decades-long efforts of banning the Taliban from governing the country. China, Russia, Pakistan, and Iran would also likely abstain from putting boots on the ground. They will nevertheless cooperate in heightening their strategic competition with the US.

The quartet’s driving force is based on a high pace of bilateralism. For instance, China and Iran recently signed a whopping $400-billion investment agreement. China and Russia have developed a comprehensive partnership which goes beyond purely military and economic cooperation. Pakistan and China enjoy a partnership within the framework of the BRI. The four are also cooperating in the Shanghai Cooperation Organization (Iran as an observer) and indeed China could push for the use of its Shanghai Cooperation Organization (SCO) to take a more active security role in Afghanistan. This would serve as a model for future similar activities by SCO, which so far has not got an opportunity to prove its own mettle.

Beijing’s cooperation with Moscow, however, will be critical considering the latter’s fears of a spill-over into post-Soviet Central Asian states. Much will depend on actual security threats from Afghanistan, but Russia would very much like to limit its involvement, most likely through provision of aid to its allies and partners in Central Asia through Collective Security Treaty Organization (CSTO) rather than direct deployment of troops. This will also provide a crucial opening for the Russia-China grouping to prove its mettle in the face of escalating criticism.

In short, it is clear that after US forces leave Afghanistan China will inevitably face a serious challenge of potential security blowback in Central Asia and Xinjiang. However, it also likely sees long-term benefits it must seize upon, namely in terms of setting up an alternative mechanism to provide a longer-term solution to the Afghan problem in a manner the US could not achieve.

Toward this end, China differentiates itself critically from the US efforts in terms of its objectives. The cornerstone of China’s aim in Afghanistan is to protect its western frontier. This is very much in contrast to the US policy which has variously concerned the destruction of Al-Qaeda in the region, undermining and containing the Taliban, and general prevention of terrorist threats emanating from the country. Whether China can be more innovative and ultimately effective on the basis of these aims remains a fundamental question. Yet, given the circumstances, it is a question that may need to be answered sometime soon.

The so-called democracy summit to be hosted by the U.S. next month should focus on its own democratic problems and...

Analysis: As regional countries come to terms with the Assad regime's survival, Syria could become an arena of growing geopolitical...

Washington’s escalating hybrid warfare operations against Ethiopia may have cost the United States its strategic influence over the globally-vital Red Sea/Suez sea lanes. The...

The US military has killed senior al-Qaeda leader Abdul Hamid al-Matar in a drone strike in Syria, a US Central...

In July 2020, Espen Andersen Bråthen was given a six-month restraining order in Kongsberg and Eiker District Court after making...

- there have been radicalization concerns The police announced that the man charged in the Kongsberg attack is a convert...