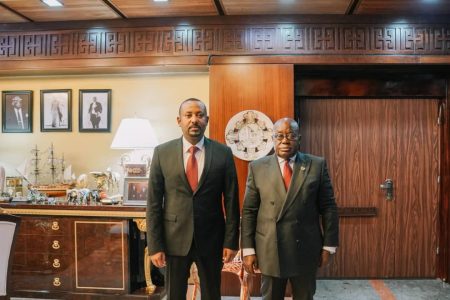 (Prensa Latina) Ethiopia has strengthened its relations with the Governments and peoples of Senegal and Ghana, during the recent working tour Prime Minister Abiy Ahmed carried out to those countries, an official communique stated on Thursday.
According to the Office of Prime Minister, the visits of Ahmed, who won the 2019 Nobel Peace Prize, to the two West African nations were fruitful, as they consolidated the ties existing so far and designed other directions to diversify them.

Ahmed first traveled to Dakar, where he discussed with Senegalese President Macky Sall issues of bilateral interest and matters of importance for Africa, among them strengthening regional economic partnerships and promoting continental integration.

The two leaders also agreed to boost the capitalization of resources and harness the capacity by the young people from both states for bilateral projects, and help build Africa’s future based on the spirit of Pan-Africanism.

On Wednesday, in Accra, the Ethiopian prime minister was received by Ghanaian President Nana Akufo-Addo, and according to his own statements posted on Twitter, they ‘discussed a wide range of issues’ and agreed to work closely together on matters of common benefit.