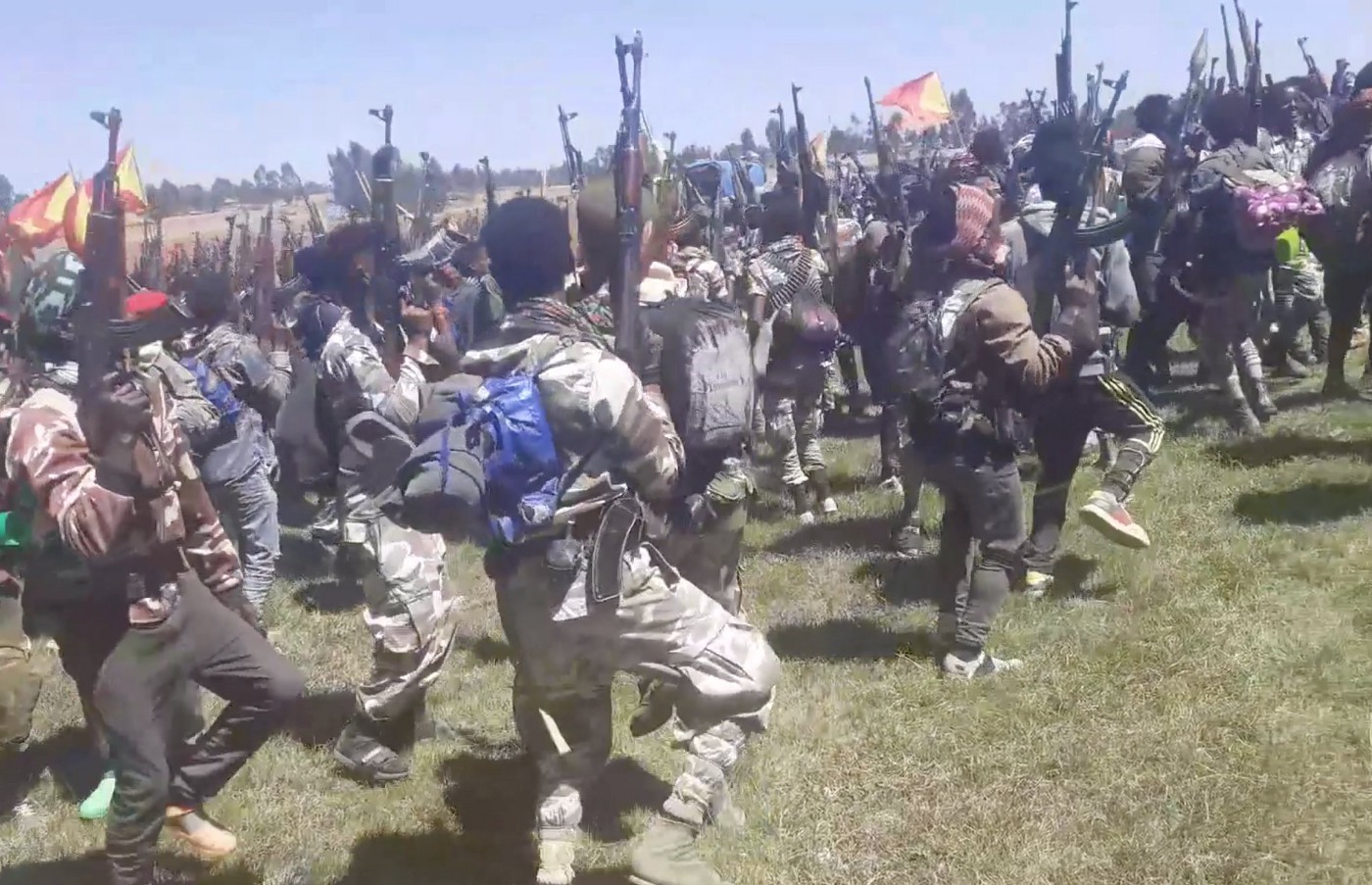 Tigrayans forced to fight, weapons being fired and risking locals’ safety, and staff told not to video TPLF “recruitment events” — UN officials don’t talk publicly about THESE conditions in the region

According to a leaked UN internal communication from last Saturday, October 2, its humanitarian staff in Shire know of or at least have heard reports of human rights abuses within the areas they serve in Tigray and seem to be indifferent to responding and acting on them.

What’s being told to a group of UN workers and cluster partners is starkly different at times to how the OCHA is publicly reporting the situation.

Among the revelations in an internal email sent to the Shire Group, one official tells recipients, “The situation across Shire AoR feels a bit tense as TF military recruitment campaign continues (and intensifies) for over a week now. Unconfirmed reports indicate that mandatory recruitment (at least one person per family) have been ongoing in the past few days, coinciding with the increasing tensions and challenges in/around TF-controlled areas in Amhara region.”

There is a lot to unpack here, but what stands out most of all is how there is no indication in the email that the UN manager wants to investigate further to confirm or that officials will ask TPLF leaders to cease and desist forcing Tigrayans to fight for a terrorist group.

The “one person per family” reference is also interesting in that the official shows no interest in determining whether these forced recruits include children.

The UN is still protesting the Ethiopia government’s move to kick out seven UN senior officials it declared persona non grata and which it accuses of undermining security operations, spreading disinformation, and collaborating with the TPLF. Sources confirmed months ago and in August that senior UN officials have harassed Ethiopian workers, helped the TPLF to sabotage national exams in Mekelle, and worked to misrepresent the UN’s own discussion of how to respond to sexual assault cases during the conflict.

It’s reasonable to ask, as the U.S. and its public advocates go on complaining over the expelled “Seven Saints,” how does the UN keep working in Tigray, knowing that Tigrayan residents, including children, are being forced to go to war?

Here is a UN official openly suggesting in an email to colleagues that ordinary Tigrayans are being forced to fight over “challenges” in TPLF controlled regions of Amhara — a hell of a euphemistic way of saying the locals are fighting back. And giving us a window on how desperate TPLF forces are, needing to drag their own people to the battle lines.

“Firearm shooting to celebrate the recruitment is frequently heard and may pose danger to local population and aid workers,” reports the email.

And what action is the UN taking to persuade TPLF soldiers and their officers to stop doing this dangerous practice? None is given.

“All partners, please, refrain from attending (and taking pictures/videos of) any recruitment-related events.”

This is quite revealing. Why must partners and UN staff even need to be told to steer clear and not capture any photo/video evidence of recruitment-related events?

Why would they attend and be fraternizing with new recruits at all?

Instructing staff not to take any photos or videos of recruiting events is a damage-control effort that speaks more to protecting the TPLF’s image than the physical safety of UN workers. What is the concern here? That staff will be seen socializing with TPLF recruits? That the recruits may include children, and the video and shots will provide more evidence? It’s a practice already confirmed by the New York Times’ own glorifying of child soldiers and in other media reports.

And as the campaign continues to try to keep senior UN officials like Kwesi Sansculotte in their jobs, despite his lack of social media professionalism which now proliferates the airwaves, the UN doesn’t seem very interested in talking about this:

“In the last couple of weeks, a few people were reportedly arrested (suspected of spying for ErDF) and many mobile phones of local people were temporarily confiscated on the suspicion of possibly conveying intelligence info using humanitarian Internet…” [The ellipse is in the original]

Would the UN like to weigh in on what happened to these arrested individuals? Did staff bother to find out their names and how and where they’re being detained? How about if they’re still alive? Given that during the Meles Zenawi era of TPLF rule, torture conducted right in downtown buildings in Addis was commonplace, what are UN staff doing to further investigate and ensure that these arrested individuals are having their rights protected?

The email doesn’t address any of this. And this, too, is glaringly omitted from the Situation Report.

“A few checkpoints along the Shire-Mekelle road remain open for humanitarians, though sporadically crowded with new recruits undergoing military training.”

This seems to indicate that any interference with aid getting into the region cannot simply be blamed on Ethiopian military and militia. In fact, the official contradicts herself in her own email:

“Items such as generators, ITC, teff, high-energy biscuits, and office furniture are still not allowed to transit to Tigray (despite approval by NDRMC these items are denied at checkpoints).”

NDRMC means the National Disaster and Risk Management Commission of the Ethiopian government. In other words, the Ethiopian government approved these items, but they were denied at checkpoints. Who then would deny them? Well, the federal army is no longer in control of the region after it left during the unilateral ceasefire, and it certainly wasn’t around at the time this email was written (October 2). So the only force that could prevent transit is the TPLF.

Keep in mind, the email tells us: “A few checkpoints along the Shire-Mekelle road remain open for humanitarians, though sporadically crowded with new recruits undergoing military training.” Shouldn’t these be the likely candidates for interfering with shipments?

Moreover, in keeping with the flood of photo/video evidence on social media, the email gives us a clear confirmation that the UN’s fleet of vehicles are being misused by the TPLF, contrary to UN aid chief Martin Griffiths trying to blame the more than 400 disappearing trucks on the Ethiopian government:

“Some rental vehicles have reportedly abused UN stickers to easily pass though checkpoints unrelated to any work done for UN,” admits the official in her email. “All partners using rental vehicles, please, make sure there is proper tracking of who and when uses the stickers so this practice of unauthorized use of stickers stops.”

The email also blames bank closures and communications disruptions for cashflow problems (neglecting to mention the number of comms technicians sent to do repairs by the Ethiopian government who have been murdered on the job by the TPLF). And then offers this startling insight into the situation:

“Partners (continue to) report that some national staff working for NGOs in Tigray are not turning up to work due to their inability to pay salaries. Some have tried (for a few months now) to get them paid in-kind/food, but the increasing food prices and depleting stocks affect the arrangement.”

It’s only speculation, but how much then is the relentless cries for return of banking and communications services driven not by the needs of ordinary Tigrayans as by the NGOs facing desertion of their staff?

And there’s more. The email includes the attachment of a PowerPoint presentation on preliminary findings of another round of “Emergency Site Assessment” by IOM Displacement Tracking Matrix. However, the methodology borders on bizarre: relying on questionnaires of 4,061 “key informants” — of whom only 35 percent were women and girls who contributed their “local knowledge.”

The data collection period spanned a few days in late July and all of August. But even a casual look suggests that someone is cooking the books on the numbers. The regional breakdown suggests only 151,040 Internally Displaced Persons in the Amhara region.

Well, I’m not good at math, but I was there in Wollo during the very period that this “assessment” was being made, and while the slide map somewhat reflects the truth of what the ArtsTV team and I found ourselves — that there were about 100,000 IDPs in the Dessie area alone — why doesn’t the map also reflect IDPs across the North Wollo woredas? How about those fleeing the shelling of Debre Tabor or the capture of Lalibela, both of which occurred during this same assessment period?

In fact, according to figures released by the Ethiopian Ministry of Peace, the number of IDPs in the Amhara region is about 550,000 as of September 15. Since more than 400,000 people didn’t suddenly cross into the region on the morning of September 1st, that means DTM had to be willfully blind in how it conducted its research through August, ignoring the great tides of victims of the TPLF looking desperately for safe haven.

The inescapable impression we’re all left with is that the UN has not only been lying to all of us, but even lying to itself. Ethiopia restricted itself to kicking out only seven senior officials. It may need to reconsider expanding the list of those who need to be shown the door.Jeff Pearce