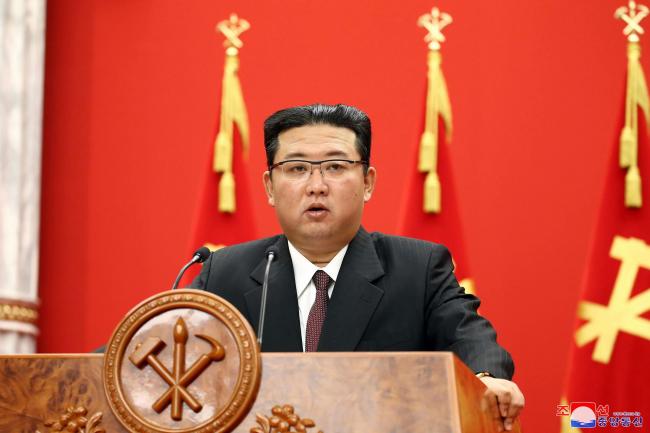 North Korea’s state media says the country’s leader Kim Jong Un has urged officials to overcome a “grim situation” facing the country and make stronger efforts to improve the food and living conditions of his people.

But no mention was made of any specific comments toward Washington and Seoul amid reports on Kim’s speech marking the 76th anniversary of the founding of the ruling Workers’ Party.

Nuclear negotiations between Washington and Pyongyang have stalled for more than two years over disagreements in exchanging the release of crippling US-led sanctions against North Korea and the North’s denuclearization steps.

The country has ramped up its missile testing activity in recent weeks while making conditional peace offers to Seoul, reviving a pattern of pressuring South Korea to secure what it wants from the US.

Pyongyang’s official Korean Central News Agency said Kim, during his speech on Sunday, said his party was determined to achieve the economic goals set during the party’s congress in January, when he acknowledged his previous economic plans were not succeeding and issued new development plans for the next five years.

The agency said Kim confirmed the determination of the party to efficiently carry out the five-year plan to boost “the national economy and solving the people’s food, clothing and housing problems”.

The KCNA said Kim analyzed the “unprecedented difficulties” facing the North and called for the party’s single-minded unity in developing the state economy in face of the “grim situation”.

Analysts say Kim is facing perhaps the toughest moment of his near decade in power.

He failed to win badly needed sanctions relief in summits with then-President Donald Trump in 2018 and 2019, then the coronavirus pandemic caused North Korea to close its borders and unleashed further economic shock after decades of mismanagement and sanctions over Kim’s nuclear weapons programme.

The World Health Organization said last week some of its Covid-19 medical supplies had arrived at a North Korea port, an indication the North was easing one of the world’s strictest pandemic border closures to receive outside help.