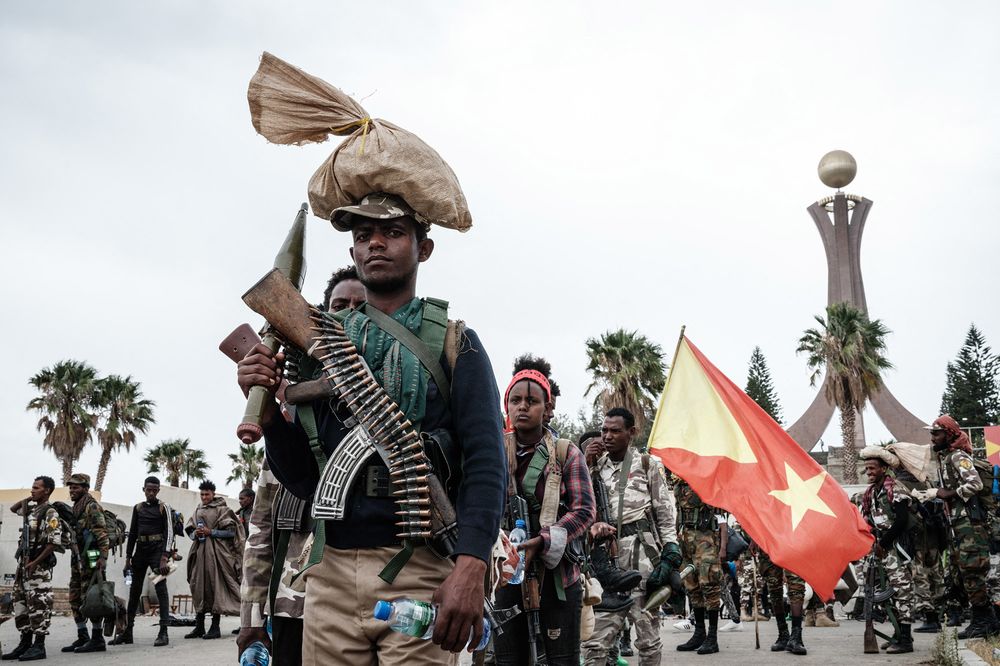 the government had a responsibility to protect its citizens across the country from acts of terrorism but gave no further details.

TPLF spokesman Getachew Reda said that despite the new offensive, army troops had yet to reach Tigray as of Monday morning.

BBC – The Ethiopian army has launched co-ordinated attacks on all fronts against forces from the northern Tigray region, the rebels say.

They said the government was using artillery, tanks, jets and drones in an attempt to “reinvade” the region.

The Ethiopian government has not confirmed any fighting, and a communications blackout makes independent verification impossible.

Asked if a ground offensive had been launched, Ethiopian Prime Minister Abiy Ahmed’s spokeswoman Billene Seyoum said the government had a responsibility to protect its citizens across the country from acts of terrorism but gave no further details.

The Ethiopian government has not confirmed reports of a major offensive against the Tigray rebels, but a mobilisation of the country’s forces and allied militia over the past few months left no doubt that a huge operation was in the offing.

With elections out of the way and the rainy season at its end, Prime Minister Abiy seems focussed on a military solution to the long-drawn out conflict.

The war has already taken its toll on the country: thousands have been killed, millions displaced and hundreds of thousands are facing famine.

But both sides have sent mixed signals about their willingness to accept a peaceful resolution.

It will, however, be a difficult task for Mr Abiy to justify another major offensive at a time when his government is facing a lot of international pressure to open talks with the rebels.

The Ethiopian army took control of most of Tigray in November 2020, after TPLF forces seized a military base.

In June 2021, the rebels recaptured Tigray in a surprise attack, and then moved into parts of neighbouring regions like Amhara.

Ethiopia has declared the TPLF a terrorist organisation, but the TPLF insists that it is the legitimate government in Tigray.

BLOOMBERG – Ethiopia’s Tigray Fighters Under Fire in Major New Offensive. Ethiopia has launched a major offensive against rebel forces from the Tigray region, carrying out air strikes in its latest bid to gain the upper hand in an almost yearlong civil war.

The move from the government of Prime Minister Abiy Ahmed comes days after he was inaugurated for a new five-year term as leader of Africa’s second-most populous country, and amid threats that the U.S. may impose sanctions against individuals and entities responsible for the violence.

Getachew Reda, a senior member of the Tigray People’s Liberation Front, said air strikes and artillery bombardment had struck parts of the northern Amhara region and another area that straddles the border with Tigray in the past two days. The number of casualties, if any, was unclear.

Abiy’s government stresses that military operations in the north are targeting the TPLF, which it has officially designated a terrorist group, and not the population at large.

TPLF spokesman Getachew Reda said that despite the new offensive, army troops had yet to reach Tigray as of Monday morning.

He also said the TPLF was not aware of any involvement by Eritrean troops, which have previously backed up Ethiopia’s military during the 11-month-old war.

The rebels’ claims could not be independently verified, as many conflict-hit areas of Amhara are under a communications blackout.

“The Government of Ethiopia has a responsibility to protect its citizens in all parts of the country from any acts of terrorism,” said Billene Seyoum, Abiy’s spokeswoman.

“The government of Ethiopia will continue to counter the TPLF’s destruction, violence and killings in the Amhara region and elsewhere.”

Humanitarian and rebel sources told AFP over the weekend that Ethiopian troops had launched air and ground strikes as part of the first phase of an offensive that — if confirmed — would come just one week after Abiy was sworn in for a new five-year term.