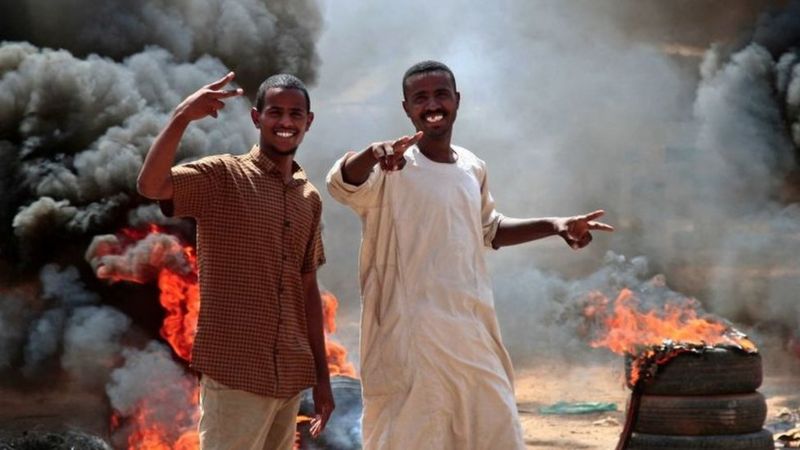 Sudanese military detained Prime Minister Abdalla Hamdok and several other cabinet ministers on Monday, prompting hundreds of people to take to the streets of Khartoum to protest the military takeover. The head of Sudan’s Sovereign Council, Abdel Fattah al-Burhan, then declared a state of emergency and dissolved the council and government.

In this June 29, 2019, file photo, Sudanese Gen. Abdel-Fattah Burhan, head of the military council, speaks during a military-backed rally, in Omdurman district, west of Khartoum, Sudan. An African Union envoy says Sudan’s ruling military council and the country’s pro-democracy movement have reached a power-sharing agreement, including a timetable for a transition to civilian rule. Mohammed el-Hassan Labat said early Friday, July 5, that both sides agreed to form a joint sovereign council that will rule the country for “three years or a little more.” The sides agreed to five seats for the military and five for civilians with an additional seat going to a civilian with military background.

The African Union includes 55 nations, and promotes cooperation between its members and is involved in several peacekeeping missions on the continent. Earlier this year, the organization suspended two of its members – Mali and Guinea – after military coups there.

A US diplomat – Africa can buy Russian grain but risks actions on oil
Ukrainian fighting tactics endanger civilians – Amnesty
Russian sanctions ‘will only be real once oil and gas imports are hit’
Britain warned of ‘astronomical’ inflation next year
G20 states revolt against US pressure – Bloomberg
Russian rouble now useless as Putin’s propaganda torn apart: ‘The shelves are empty!’