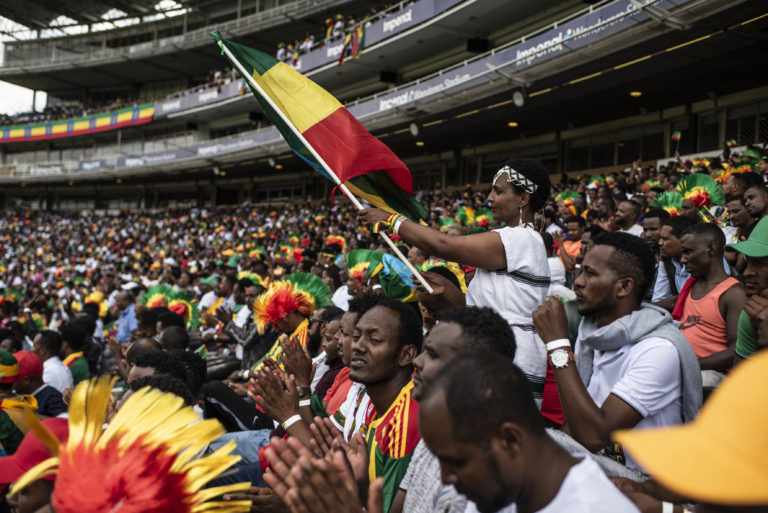 Israel, as a friendly nation, continues to be a staunch supporter of peace and stability in Ethiopia.

The historical relationship between Ethiopia and Israel goes back to biblical times. It is very common to hear Ethiopian elders routinely pray for the well-being of Israel in their early morning prayers. We have deep historical and spiritual people-to-people relations. In the past year, Ethiopia has been going through difficult times. In light of the relations between the two countries, it is time for Israel to stand with Ethiopia.

I interviewed Mesfin Tegenu, chairman of the American Ethiopian Public Affairs Committee who is working to bring all Ethiopians in the diaspora together for joint action to support Ethiopia by bringing the truth to the fore. Over the last few weeks we are witnessing a concerted media campaign against Ethiopia by renown media outlets such as BBC, CNN, Al Jazeera (English), Reuters and AP among others.

These mainstream media giants have relentlessly been engaged in circulating fake news with regard to the situation in Ethiopia. In the face of this violent and brutal campaign, Ethiopia needs the support of its long-time friends and allies – none more so than Israel. The two nations have a historical partnership and links which transcend politics, based on cultural and spiritual legacy.

Israel, as a friendly nation, continues to be a staunch supporter of peace and stability in Ethiopia. We believe that the relationship could be enhanced at this time. As Ethiopia is passing through challenging times at the hands of an insurgency group whose focus is destabilizing the nation and committing illegal acts of violence, we Ethiopian Israelis believe Israel must engage with and support the legitimate and democratically-elected government, not only by providing military assistance when needed, but also political backing at all levels.

ETHIOPIANS ATTEND a pro-government rally to denounce what the organizers say is the Tigray People’s Liberation Front (TPLF) and the Western countries’ interference in internal affairs of the country, at Meskel Square in Addis Ababa, earlier this week. (credit: Tiksa Negeri/Reuters)In the context of the looming crisis, the loss of life and the types of crimes committed by the terrorist forces are disturbing.

For us in Israel, it is troubling to hear that the Tigray People’s Liberation Front (TPLF) is working to wipe out the Amhara people. Not only does the TPLF’s continuing campaign of aggression threaten the stability of Ethiopia, it also threatens the lives of Ethiopian Jews from the region. The TPLF have been attacking the people in the adjacent regions of Afar and Amhara since July.

As verified by Amnesty International, many women were raped at gunpoint, people were robbed, and subjected to physical assaults by TPLF fighters, who also destroyed and looted medical facilities and schools in these regions.THE INTERNATIONAL community needs to condemn these criminal acts. Mesfin said that for over a year Ethiopians has been suffering from terrorist attacks. Yet the international community is still failing to condemn the atrocities of the (TPLF) which began its reign of terror by attacking Ethiopian government forces and continues the violence to this very day. Prisene på luksuscruise i 2021 vil kanskje overraske degSponsored by Cruise | SøkeannonserResponding to the calls from international partners, the Ethiopian government declared a ceasefire and withdrew forces from the region.

On the other hand, the TPLF rejected the democratically-elected government’s offer of a ceasefire, and continues committing what Amnesty International Secretary General Agnès Callamard described as, “despicable acts… that amount to war crimes, and potentially crimes against humanity.”Just this month, Amnesty International published a report highlighting the testimony of 16 women from small towns in Ethiopia’s Amhara region. If this type of violence is allowed to spread further and those responsible aren’t brought to justice, more innocent lives will be harmed.When there were allegations of human rights abuses last year, there were calls from the US, UN and EU to conduct an inquiry on the perpetrators. The Ethiopian government agreed to a joint investigation by the UN Human Rights Office and the Ethiopian Human Rights Council. T

The report on the joint investigation has been presented to the UN and it was accepted by major countries, including at the UN and in the EU. It is high time for all partners to support the cause of Ethiopia. Ethiopia needs Israel’s help to highlight the atrocities being committed by the TPLF and call for punishment of the group’s leadership.

The international community seems to have forgotten that the TPLF was a brutal dictatorship that controlled Ethiopia with an iron grip for nearly 28 years. Mesfin said that “If the US administration continues the pressure on the Ethiopian government and fails to stop the TPLF from destabilizing the country, there will dire consequences.”He also accentuates his sincere hope that “Ethiopia’s historic allies, like Israel, help the country avoid this fate. It is time to stop them and consider targeted sanctions against the TPLF leadership – many of whom have foreign assets and capital.

” The people of Ethiopia and the diaspora across the world do not want a return to those dark days. As the chairperson of the American Ethiopian Public Affairs Committee noted, “many members of the Ethiopian diaspora want to see the TPLF stopped and a show of international support, particularly from a long-time ally, is vital for the Ethiopian government at this time.”

The writer is a social activist and owner of the Ethiopian-Israeli IETV channel, the only such media outlet for the Ethiopian community in Israel.