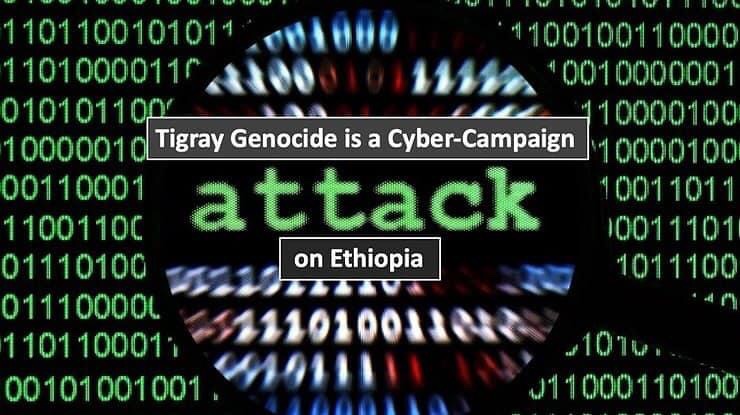 A team of scientists and data analysts at GETFACTet investigated social media data to find the origin and trending of the hashtag that popularized the Tigray genocide narrative worldwide, which has been playing a key part in the international community’s response to Ethiopia, including US foreign policy.

The data that revealed a piece of shocking information indicates that non-military actors outside Ethiopia were coordinating the #TigaryGenocide cyber campaign linked to the Tigray People’s Liberation Front (TPLF) military command preplanned military attack or “pre-emptive strike” on the Ethiopian military base.

According to the findings, on the night of Nov 3rd and Nov 4th, 2020, 17 accounts were created, and the first “#TigrayGenocide” tweet began on Tuesday at 19:46 from one of these accounts. This is considered the genesis of the “#TigrayGenocide” hashtag, and it was never used before this day.

This shows that the “#TigrayGenocide” was launched before and during the attack on thousands of Ethiopian National Defense Forces (ENDF) stationed in Tigray, many of whom were massacred by TPLF forces while they slept. “#TigrayGenocide” was already launched and circulating the international social media hubs long before Ethiopian forces responded to the attack by the TPLF that started the war and the ongoing humanitarian crisis.

Upon closer examination of the numbers, approximately 184 additional accounts were created, with a total of 201 accounts being created nearly the same day on Nov 4th, 2020, pushing the “#TigrayGenocide” worldwide. This is the most significant number of accounts created to propagate the genocide narrative within a single day (Figure 1, see the spike on Nov 4th).

After Nov 5th, 2020, daily new account creation declined by more than 80 percent, while the #TigrayGencoide retweets sharply increased. This indicates the first 201 accounts created on Nov 3rd and 4th, 2020, were the ones driving the genocide hashtag for the consecutive months following the beginning of the conflict.

Figure 1. The number of newly created accounts per day that start twitting “#TigrayGenocide” versus date.

Another eyebrow-raising fact about the “#TigrayGenocide” campaign is that the hashtag is circulating without providing specific incidents that include the number of victims, location, date, and time of the alleged genocidal act. This loose use of the term ‘genocide’ without confirmed evidence made this serious term a broad statement.

As we looked at these accounts deeper, we uncovered a large percentage of the accounts tweeting “#TigrayGenocide” for the first two months were outside Ethiopia and concentrated in specific locations such as Melbourne-Australia, Colorado-USA, Enschede-Netherland, and Islington-London.

As time progressed between January – February 2021, the same hashtag was trending with 50,000 retweets per day. A coordinated effort from non-Ethiopian individuals from Tanzania and Kenya, with more than a million account followers, were tweeting this hashtag, giving it an international social media voice.

The fact that #TigrayGenocide began on the night of Nov 3-4th during the TPLF attack and electric blackout, even before the Ethiopian National Defense Force (ENDF) response, clearly shows that non-military actors outside Ethiopia were coordinating a #TigrayGenocide cyber attack with military action in Tigray. This campaign was designed to distract the international community and shape the public perception away from the actual aggression of the TPLF.

These factual reasons raise important alarming bells for those genuinely concerned with preventing genocides and conflicts. The intentional, premeditated, and well-coordinated use of these accounts to propagate an unconfirmed narrative of genocide should also be a call to action for international lawyers and policymakers seeking to curb the misuse of the media to create conditions that advance narratives of fear and hatred, which escalate conflicts to ultimately cause the deaths and dislocation of millions based on falsehoods.

Read the original story on Getfact