The only solution for the people of Tigray’s problems today and tomorrow is a peaceful alternative! 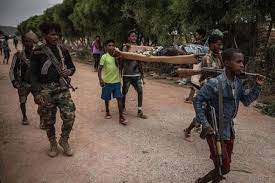 It is well known that the government has been taking steps to bring the war in the northern part of Ethiopia to a peaceful conclusion. After driving the terrorist TPLF out of most of Amhara and Afar, the government has;

• Refrained from entering the Tigray region despite having full military and logistical capability;
• Established a unilateral ceasefire; and
• Created a favorable environment for streamlined and uninterrupted humanitarian aid to enter the Tigray region;
• released prisoners on the grounds that it will open the door to peace;
• in order to fully explore the peace alternative, the Peace Committee was officially put to operation, and a clear direction was established;
• enabled transportation of essentials to Tigray; and
• began efforts to repair the service facilities destroyed by the terrorist group using third parties.

However, the terrorist organization, as well as its foreign backers, have expressed a strong desire to continue fighting. In the last six months, they have been committing various provocations, boasting with claims such as “we will break the siege,” “our power is our confidence,” “the lands of Tigray have been invaded and we will free them,” and so on. They tried to attack from the west several times and were always defeated. Despite their repeated attempts to attack through South Tigray, the government has thwarted their efforts and prevented the situation from worsening by stating that the main solution is the path of peace.

However, ignoring all of the peace alternatives presented by the government, the terrorist group TPLF armed group continued its recent provocations and launched an attack this morning at 5 a.m. on the eastern front in Bisober, Zobel, and Tekulesh directions. They officially violated the ceasefire with their actions. Both their attack and the subsequent statement indicate that they were preparing for the provocation.

They have committed attacks and are crying out with the false propaganda that they have already mastered, as the Amharic proverb goes “a lash whips itself and screams.” By falsely accusing the government that has extended its hand for peace and claiming that “the negotiations have already failed,” they are officially declaring that they will not stop employing Tigrayan youth and are preparing for war.

It is clear that rousing their international allies from their slumber is part of the propaganda campaign that will accompany the war preparations. The international community should put strong pressure on the TPLF to stop drumming up war in order to kill Tigrayan youth.

The government of Ethiopia is calling on Ethiopians throughout the country and around the world to unite in order to repel this destructive force and neutralize the destruction attempt of this terrorist group, which has the clear goal of disintegrating Ethiopia.

Recognizing that all of Ethiopia’s problems can only be solved peacefully, the government is adamant that peace is always the best solution. However, if the TPLF terrorist group continues its provocations, the government is obligated by law, history, and morality to take all necessary steps to protect the country. To accomplish this, the government and security forces are mobilizing all of their resources and capabilities.