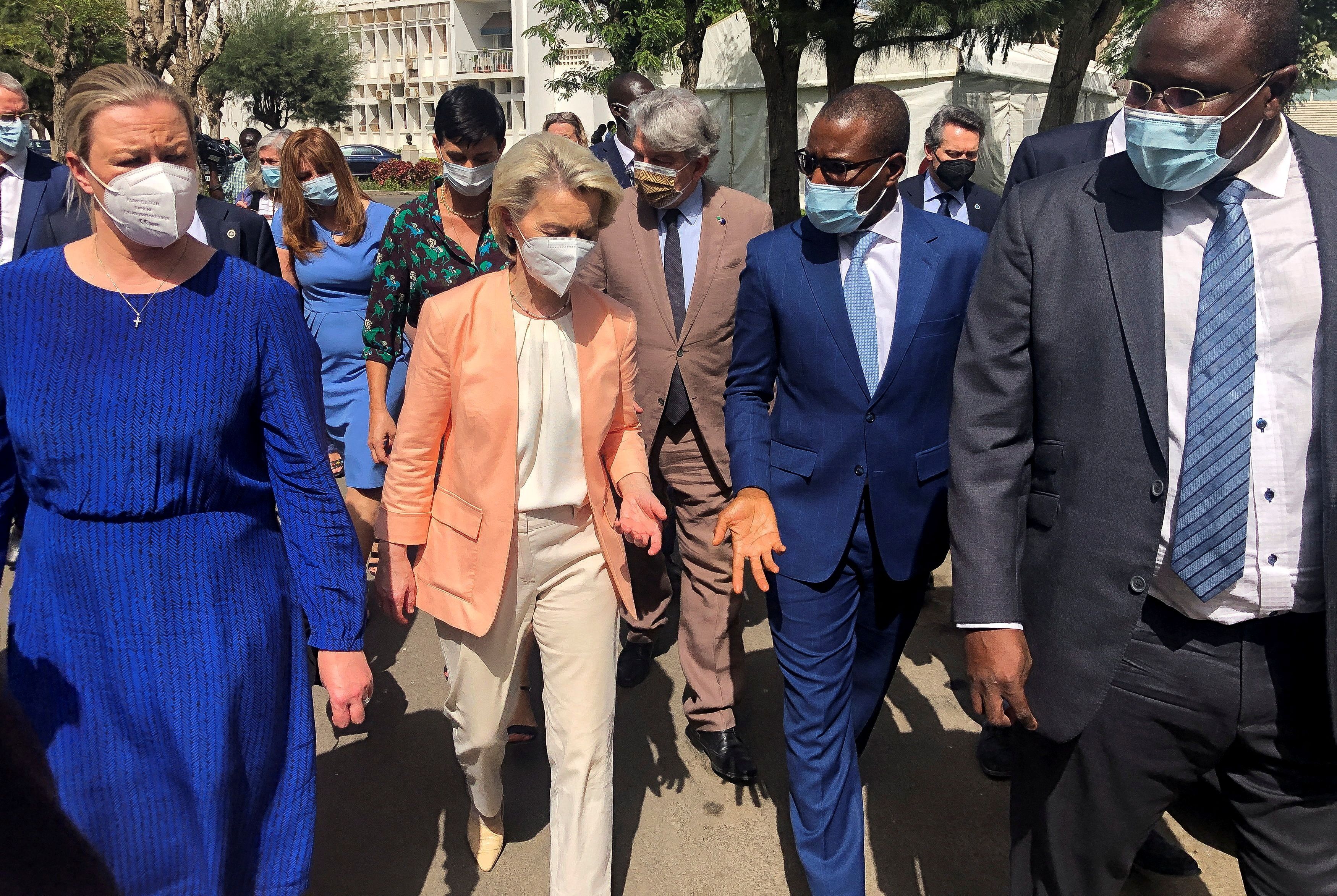 BRUSSELS, Feb 17 (Reuters) – The EU welcomed more than 40 African leaders to Brussels on Thursday in an effort to reassert its influence on a continent where China and Russia have made hefty investment inroads, and where many felt let down by Europe’s COVID-19 vaccines rollout.

The European Union will offer several packages of support at the summit to bolster health, education and stability in Africa, and will pledge half of a new 300 billion euro ($340.9 billion)investment drive launched to rival China’s Belt and Road Initiative.

But the meeting also takes place just as France and its allies fighting Islamist militants in Mali said on Thursday they would begin their military withdrawal from the country. read more

European and other wealthy nations were heavily criticised for hoarding protective equipment and later vaccines during the pandemic, with some African leaders saying the slow pace of donations could lead to “vaccine apartheid”.

By the start of February, only 11% of Africans were fully vaccinated against the coronavirus – far fewer than in richer parts of the world.

Sierra Leone President Julius Maada Bio challenged Europeans to remember there are “human beings on the other side” in Africa who have been left behind in the unequal global response to COVID-19, adding this has security implications. read more

There was also dismay over Europe’s travel bans on South Africa after the Omicron variant was detected there late last year.

South African President Cyril Ramaphosa said he and other African leaders would raise the issue of intellectual property rights for COVID vaccines and treatments. Many developing countries want these rights waived, but face opposition from rich nations, including many in the EU.

Tensions run deeper on other issues between two continents with colonial ties, including over migration flows and the erosion of democracy in several African countries, some of which have recently seen coups d’etat including Mali. read more

Frank Mattheis, an expert in regional studies at the United Nations University, said the summit would seek to highlight areas where cooperation is promising and avoid thorny issues.

The European Commission announced this week that the EU and the Gates Foundation would invest more than 100 million euros in the next five years to help set up an African medicines regulator to boost the continent’s drugs and vaccine production. read more

The race to establish the African Medicines Agency (AMA) comes after the pandemic exposed the region’s dependence on imported vaccines.

Just over 5% of medicines and 1% of vaccines consumed by Africa’s population of 1.2 billion people are produced locally. The EU says it will provide support to help Africa produce 60% of the vaccines it needs by 2040.

Part of the funding for the AMA will come from 150 billion euros to be mobilised for Africa over the next seven years under the EU’s Global Gateway scheme.

Separately, the European Investment Bank announced on Thursday it would make available 500 million euros in cheap loans to African countries to strengthen healthcare systems. That credit line is expected to mobilise a total of 1 billion euros in private and public investments, the bank said.

W. Gyude Moore, a senior policy analyst at the Center for Global Development, welcomed the investment pledge and said he hoped it would start a partnership of true equals.

“But there is a long history of unfulfilled promises like this when it comes to the EU and Africa, so the African Union, while cautiously optimistic, will remain sceptical until this pledge is converted into projects on the ground.”

READ THE ORIGINAL STORY ON REUTERS

The European Union will offer several packages of support at the summit to bolster health, education and stability in Africa, and will pledge half of a new 300 billion euro ($340.9 billion)investment drive launched to rival China’s Belt and Road Initiative.