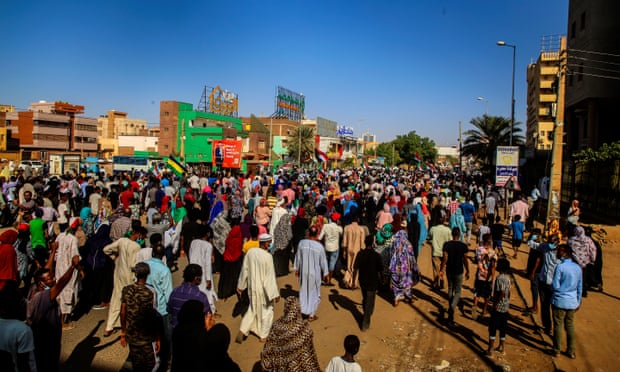 Sudanese security forces have shot dead at least 14 anti-coup protesters and wounded dozens more, in the bloodiest day since the military seized power on 25 October.

The fatalities in Khartoum on Wednesday raised to 38 the death toll from unrest since the military seized power, a pro-democracy doctors’ union said. Hundreds more have been wounded.

Demonstrators had taken to the streets across the capital even though telephone lines and internet services had been disrupted since the military took over, AFP journalists reported.

Police have denied using live ammunition and state television announced an investigation into the deaths.

The doctors’ union said most of the casualties had suffered gunshot wounds to “the head, neck or torso”, but added that the demonstrators, undeterred and behind makeshift barricades, kept up their protests.

Demonstrations also erupted in Port Sudan, an AFP journalist said, against the coup that halted a democratic transition following the 2019 toppling of longtime dictator Omar al-Bashir.

“It was a very bad day for the protesters,” Soha, a 42-year-old protester, told AFP. “I saw a person with gunshot wounds behind me and there were a lot of arrests” in Khartoum.

Hundreds remained on the streets after nightfall, especially in northern Khartoum where teargas fire reached inside hospitals, doctors said. Rallies in other cities dispersed.

Hundreds have been arrested in efforts to stem the protests, including activists, passersby and journalists. Qatari network Al Jazeera’s bureau chief was arrested on Sunday and released on Tuesday.

The Sudanese Professionals Association, an umbrella of unions instrumental in the 2019 protests, denounced “immense crimes against humanity” and accused the security forces of “premeditated killings”.

The US secretary of state, Antony Blinken, on a visit to Kenya on Wednesday urged Africans to watch out for rising threats to democracy. He told Sudan’s military the country stood to regain badly needed international aid if it restores the “legitimacy” of civilian government.

Washington has suspended about $700m in assistance to Sudan since the coup.

“If the military puts this train back on its tracks and does what’s necessary, I think the support that has been very strong from the international community can resume,” said Blinken.

Prior to 2019, Sudan had been under some form of military dictatorship for much of its modern history.

Burhan has declared a state of emergency, ousted the government and detained the civilian leadership, derailing a transition to full civilian rule and drawing international condemnation.

He insists the military’s move “was not a coup”.

The US assistant secretary of state for African affairs, Molly Phee, has been shuttling between the generals and the ousted civilian government in an attempt to broker a way out of the crisis.

Phee has called for the reinstatement of the ousted prime minister, Abdalla Hamdok, who is effectively under house arrest.

The few remaining free members of his cabinet continue to describe themselves as the “legitimate” government and refuse to negotiate with the military leaders.

While some of the civilian leaders have been freed since the power grab, new ones have been arrested.

August 7, 2022A US diplomat – Africa can buy Russian grain but risks actions on oil
August 7, 2022Ukrainian fighting tactics endanger civilians – Amnesty
August 7, 2022Russian sanctions ‘will only be real once oil and gas imports are hit’
August 7, 2022Britain warned of ‘astronomical’ inflation next year