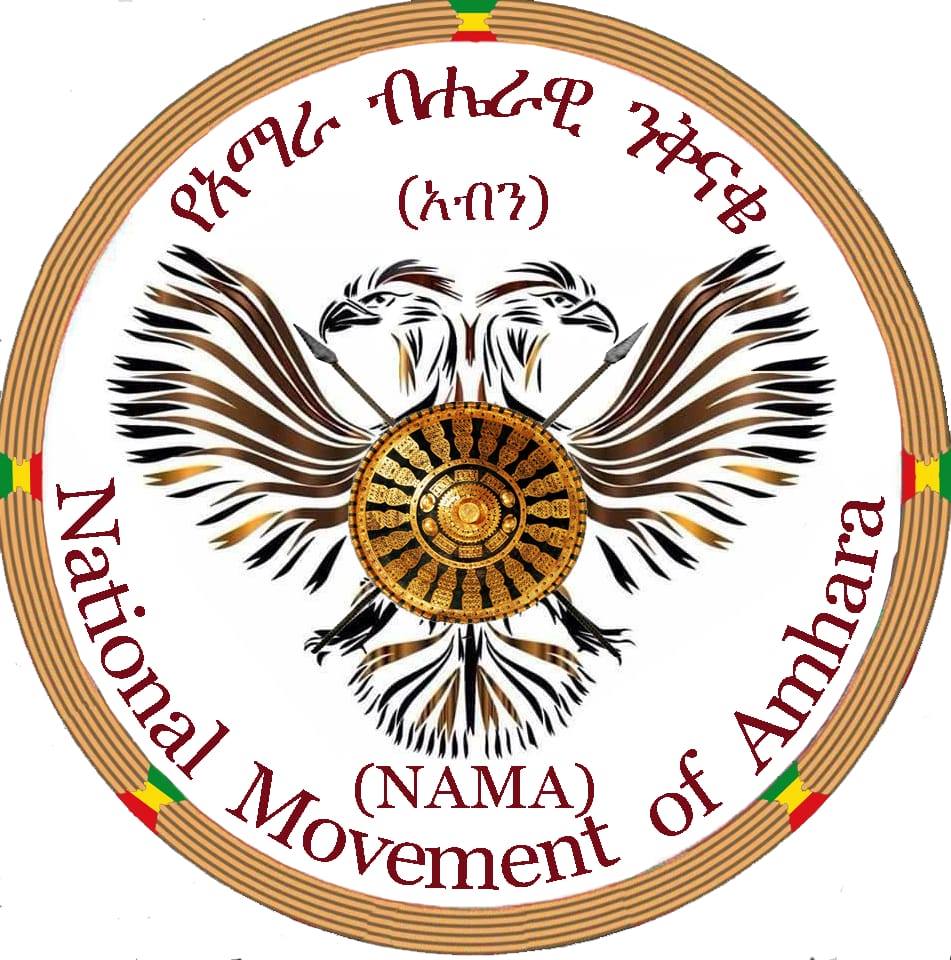 The National Movement of Amhara(NaMA) Denounces International Violations of the Sovereignty of Ethiopia1. BackgroundDuring the past three decades, Ethiopia went through a grievous episode in its history under a minority tyrannical Tigrean People’s Liberation Front (TPLF)-led government. The regime introduced ethnicity as an organizing principle of the state and had an ideological detest to the Ethiopian past, the Will of the People, and the rights and aspirations of citizens.

TPLF politics rooted in the tyranny of custom and mainstreamed in the Constitution, government institutions, policies and programs resulted in deep social fractures, poverty, insecurity and threatened the very fabrics of the nation. Ethiopian people fought long and hard finally to overthrow and banish the hated regime to Tigray in April 2018. Even after its oust from power, however, TPLF spared no effort to destabilize the country.

In a final desperate attempt to reclaim power it launched a most treacherous attack on the northern command of the Ethiopian National Defense Forces (ENDF) on 3 November 2020.A propaganda war against Ethiopia has been taking shape since the unfortunate conflict flared in the northern part of the country. A deliberate misinformation campaign orchestrated by TPLF global partners and sympathizers peddling dangerous lies and baseless incriminations now seems to contaminate international news outlets, human rights institutions, politicians and even statesmen and governments.

A recent flurry of reports, newspaper articles, opinion pieces and statements issued by various bodies, among others a White House Statement on February 24, Amnesty International report on 25 February, New York Times article on 26 February, are build ups of the insidious lies that culminated in the issue of Secretary of State Anthony Blinken’s statements on February 27 and March 2, 2021.

The National Movement of Amhara (NaMA) has been closely following the efforts to sabotage and twist the hands of Ethiopia and resurrect TPLF from its imminent grave, which involved prominent international organizations, including the United Nations and several other advocates of human rights, human security and public order. This is particularly alarming for all Ethiopians who have suffered under the tyrannical clutches of TPLF regime and know the value of genuine peace and stability.

the BlameThe dominant preoccupation of the pro-TPLF campaign is shifting the blame for provoking the war from TPLF to the Ethiopian government. TPLF top officials, such as Getachew Reda, Sekou-Toure Getachew and Gebre Gebre-Egziabher, have declared to the entire world in no uncertain terms that TPLF launched preemptive attacks, on the night of 3 November 2020, to neutralize the Northern Command of the ENDF. This was a preplanned and highly coordinated attack aimed to draw the federal government into a full-scale war.In spite of this explicit admission, TPLF advocates unashamedly accuse Ethiopian government for launching a surprise military offensive on Tigray! This seems an attempt to draw moral equivalence between an insurgent regional group and a sovereign state and exculpate TPLF’s treasonous adventures.

Another aspect of the propaganda blitz is the very unprofessional and insensitive reduction of the conflict to a rivalry between the people of Amhara and Tigray. This is regardless of the multiethnic coalition Prosperity Party leadership and the multiethnic composition of the national army. This reductionism belittles the sacrifices of other Ethiopians, such as the Afar Special Forces who thwarted TPLF`s attempt to expand the conflict to other regions, and underestimates their understanding of citizenship, patriotism and the rule of law.

Some use this distortion is then used as springboard to accuse the Amhara as invaders and expansionists. Neither TPLF’s invasion of Kirakir village of the Amhara region on 3 November 2013 nor its subsequent missile bombardment of Amhara cities of Bahir Dar and Gondar in open disregard to international law is related. Most accusers are also silent about the brutal atrocities of Mai-Kadra town in which TPLF genocidal brigade known as Samre slaughtered more than two thousand innocent civilian Amharas on a single day (10 November 2020). The Mai-kadra atrocities were noted by several internal and international human rights institutions and ranked by the Interpol among world’s top heinous violations of the previous year.

A logical outcome of the lopsided view is blaming the Amhara people who for three decades have been the primary targets of TPLF’s ethnic policies. Government backed narratives of ethnic denigration, profiling, and structural violence were implemented as a political strategy to isolate, disrupt and dismantle the social, economic and political foundation of Amhara people.

The worst epicenters of TPLF systematic ethnic attacks, ethnic cleansing and genocide are Amhara territories of Raya, Wolkait, Tegede, Tselemt, which were unlawfully annexed into TPLF’s Greater Tigray region following its ascent to power. For nearly three decades, Tigray National Regional State (TNRS) implemented systematic ethnic extermination of the Amhara people of these areas by a policy of taking their land, language and women, and killing the men.

There is ample evidence documenting the unspeakable sufferings of Amhara people in the areas annexed by TNRS. TPLF had resettled several thousands of demobilized Tigrean soldiers and encouraged Tigrean civilians to migrate and settle in the region en mass. Native Amharas were subjected to confiscation, mass eviction, incarceration, torture, and massacre. They were discriminated in public service and even banned from using their language in education, bureaucracy, the courts and all forms of public communication.

What could be genocide if this is not? The heinous crimes committed on the occupied territories are verbatim enactments of the international definition of genocide. Nevertheless, the ruthless and secretive TPLF somehow managed to eclipse and hush up such most egregious violations in recent memory. It is a pity that even after the Mai-Kadra atrocities, there are some who seek excuses for the barbarous nature of the group and blame the victims for being slaughtered in thousands.

Another tactic used by the pro-TPLF camp is inflating the territorial aspect of the issue. The areas often glossed over as Western Tigray namely Wolkait, Tegedie, Telemt; and Raya as Southern Tigray, are traditional Amhara territories recently freed from the genocidal clutches of the TPLF. The people of these areas have reclaimed their identity, land and administration, and are striving to initiate a process of social healing, rehabilitation and revival. Any uninformed call for resumption of the status quo in the liberated areas, in the form of Tigrean civil or military administration and control, is tantamount to a restoration of injustice, horror and genocide on Amhara people. Any pronouncement which downplays the most sacred ideals of freedom and the right to life amounts to forfeiture of the universal commitment to human rights and should never be entertained.

3. Towards Stability of the Horn of Africa

NaMA is deeply saddened by the internationally orchestrated sabotage and misinformation to save a most ruthless group (TPLF), which for three decades maintained a rogue state in Ethiopia and had no little role in turning the Horn of Africa into an epicenter of ethnic strife, extremism, state collapse, war, hunger and destabilization.

We are opposition party having many differences with the ruling government, including some of the ways it handled the conflict. However, we are firmly behind its effort to defend the sovereignty of the state and resist any form of hand twisting in its internal affairs. We likewise call the international community to respect the inviolable rights of Ethiopia as stipulated in international public law.

We believe that a campaign to cast doubts and skepticism on the intentions and ongoing efforts of the Ethiopian state is counterproductive to the restoration of peace and order in the region. In actual fact the federal government deserves some credit for limiting the objective of the campaign, moderating its propaganda, avoiding wartime hysteria, limiting its military targets, minimizing civilian casualty, and quick rehabilitation efforts.

NaMA appreciates the invaluable contribution of international humanitarian organizations such as Amnesty International, Human Rights Watch and others in the fight for freedom, justice and restoration of human dignity. We urge them to step up the humanitarian assistance to Tigray and assist in the speedy rehabilitation and reintegration of the region to the rest of Ethiopia.

We also demand all international organizations to uphold their commitment to excellence and professionalism, root out infiltration by extraneous interests, and desist from uncalled for intervention in the affairs of a sovereign member of the international community.

We believe that bogus claims based on flimsy evidence only help to encourage armed violence and are detrimental to the peace and stability of the region. A new Horn without TPLF is inevitable and the diplomatic focus should be on rethinking about the peace and security architecture of the region. This should take into account the historical, political and ethnic dynamics, and refocus from radical ethno-nationalists fighting to dismantle states toward nation-builders and historical forces of peace and stability in the region.

NaMA thus calls for a complete defeat of TPLF as the best guarantee for the future peace and security of the people of Tigray and Ethiopia as well as the stability of the larger Horn. Ethiopia should be more focused and fight back TPLF and affiliates’ propaganda offensive on both domestic and international fronts. We also demand Ethiopia to withdraw its backing and call for the removal of Tedros Adhanom from his WHO post.

Finally, NaMA respectfully calls all Ethiopians at home and in diaspora to note the gravity of the ongoing threats confronting our country and stand together to fight back the threats to the national unity and integrity of their beloved Ethiopia.

1. The House of Peoples Representatives, FDRE

2. The House of Federation, FDRE

3. Office of the Prime Minister, Ethiopia

11. The US Embassy, Addis Ababa